Look, my sister gave me a horn spoon. We found it in a store called Old Faithful, where we embarrassed ourselves by making simultaneous ear-splitting squeals upon its discovery. It’s everything I hoped and dreamed it would be, my spoon.

It’s been a rough several weeks, though I hope things are now set to turn out well. I spent all of yesterday taking care of my dog, Moss, who has just returned from throat surgery (which we were extremely fortunate to discover he needed in time for it to save his life). I made a celebratory rice pudding. Just for myself, because I was (conveniently) all alone. 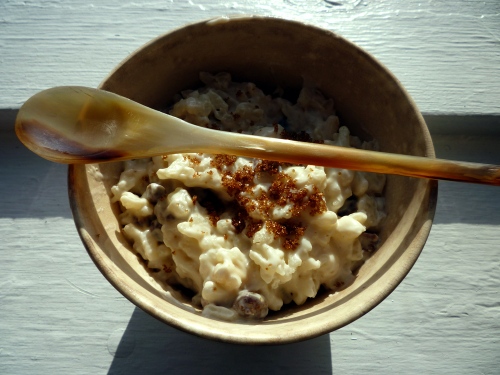 Kimi made me a rice pudding last weekend, which disappeared, like, dude, absurdly fast. I wanted more. My exhausted brain has just been stuck on it. Rice pudding? Rice pudding, gelfling, please?

So here is my version. It’s the easiest thing in the world, and I could live off of it forever.

MY RICE PUDDING: 1001 Nights of Not Sharing

This is enough for one (hoarding) person, but you can easily double it

-1/2 litre of either whole milk or half-and-half (or cream, if you are manly and stout of heart)
-about 150 grams of coconut milk – a small can
-75 grams of arborio rice (I think that’s, like, 1/3 cup or a bit more?)
-3-4 tablespoons of golden caster sugar
-one or two pinches of cardamom powder, or a couple ground-up pods
-teensy pinch of nutmeg
-some pistachios, if you’ve got them, chopped roughly
-maybe some brown sugar
If you like raisins:
-1/4 to 1/2 cup of sultana raisins (or whatever you want)
-vanilla, and orange flower water if you have it

Heat milk until just before boiling, then add the rice and coconut milk and sugar and spices, then lower the heat to a (very) gentle simmer and stir for 20-25 mins (or so) until risotto-ish in texture. You can also toss in the raisins if you want, maybe with a bit more liquid, but I prefer to plump them up separately and add them at the end, because they stay nice and tasty and whole that way, and don’t get all broken up by the lengthy constant stirring. So, as you take care to stir the rice continuously, put the raisins in another pot with just enough water to cover them and a dash of vanilla and a sprinkling of orange flower water. Heat them until boiling, then lower them to a brisker-than-the-rice, plump-up-the-jam simmer. It’s like a deadly, sinuous dance, doing both of these things at once without a weird gross skin forming on top of your milk. Or, I guess you could fatten the raisins before you start, but that’s less awesome. When the rice is done (the grains are still holding their shape, but the milk has become thick and creamy), drain the raisins and throw them in. You can eat the pudding warm, with melting brown sugar and the chopped nuts on top, but I like it fridge-cold. It improves even further overnight.

2 responses to “Spoons and Pudding”