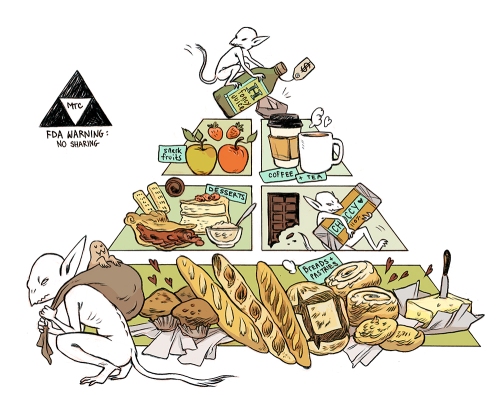 I put this up on Tumblr last week, but it really belongs on Hchom. What we have here, of course, is my own version of the government-approved food pyramid of the 80’s and 90’s. For anybody not familiar, the idea is that the bottom rung represents the food you’re supposed to eat in the largest quantities, ascending to the foods you’re supposed to eat in the smallest quantities. I’ll spare you guys my rant about how stupid I think the original was (and is), but individual and ever-changing food pyramids are a different thing entirely.

What does mine contain? WELL. The bottom level is obviously all breads and muffins and scones and stuff, followed one tier up by various desserts (the distinction between these two might be a little fuzzy, but nevermind). Then fine choccy, of course, then fruit, and by fruit I mean mostly apples. Then coffee and tea (which probably should have been lower down, if I’m being honest). Then last of all, the top tier changes month by month depending on what silly thing I’m fixating on. At the moment it’s those stupid, trendy (expensive, argh) green juices that I used to mock, but now crave constantly god damn it.