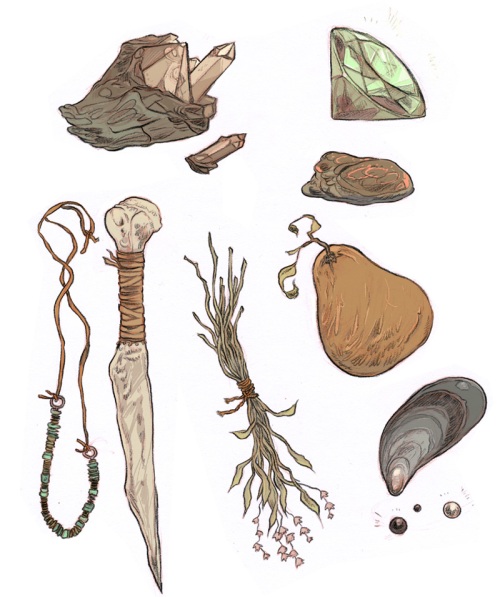 Playing a big open-world RPG, the main task available to you, of course, is to go out and find things to fight. That is true of playing almost every game, perhaps. One of the things that still seems to define many RPGs (as that becomes increasingly difficult) is the extensive inventory of items that you can collect as you progress. Treasure hunting, in other words.

I love collecting stuff in games. There’s seldom much purpose to it, but for me it is a purpose in itself. Playing Oblivion (The Elder Scrolls IV), I never, ever sold gems to NPCs. I’d keep them all, and drop them in bowls (organised by colour) in my various in-game houses. Yes, that’s right, just like in my real life. This is the kind of crazy-person behavior that I want to enable in The Crossing.

I do think that miscellaneous items need to have some practical use. You want an inventory of things that you’re excited to have found, that don’t feel like endless clutter. I know that many games already have elaborate crafting systems. Most of them I’ve never played, so for all I know the platonic ideal of crafting mechanic has already been implemented somewhere, but I haven’t seen it for myself.

My main complaint with crafting, as I encounter it in games, is that it never actually feels like you’re creating anything. In some cases you simply select an item from a list, and it gets made, just like that. In FFXIV there was a mini-game, which was an improvement over the previous system of random success or failure, but it got tedious quickly.

My second complaint is that crafting is often either too convoluted (with too many steps in the process), or too unrewardingly simple. I feel like there should be a sense of skill-testing challenge, but the actual repeated creation of items shouldn’t be an arduous affair.

In order to learn how to craft with specific materials in The Crossing, you need to find an NPC who can train you in the use of those materials. So, once you’ve been trained by a leathercrafter, you have new options available to you when you are crafting. If you wanted to make some body armour, you could now choose from a variety of designs in leather. And if you’ve also been trained by, say, a weaver, then you might choose to make more complex armour – a leather body piece with cloth sleeves. Get training from a dyer, and dye it blue.

Learning the skills from the NPCs would involve some degree of challenge in the form of a mini-game, or quest. Crafting the item itself, however, would simply involve you designing it. Choosing shapes and components and colours based on the training you have available thus far, and the base materials that you have on hand. It should actually be fun. And its purpose should be to extend the character creation process past the beginning of the game, so that customisation becomes indefinite.

This apprenticeship system – which makes a distinction between skills (level-ups, essentially) gained from a specific encounter, and experience gained from using those skills out in the world – would be a major institution in The Crossing. I’ll talk about it more tomorrow. 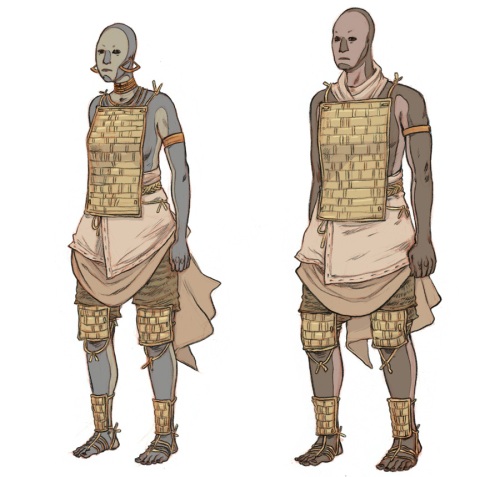 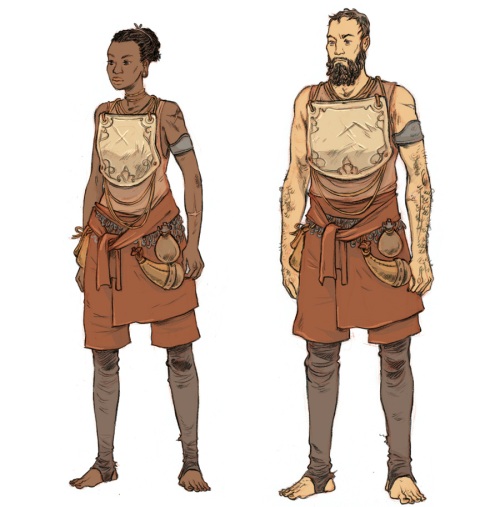 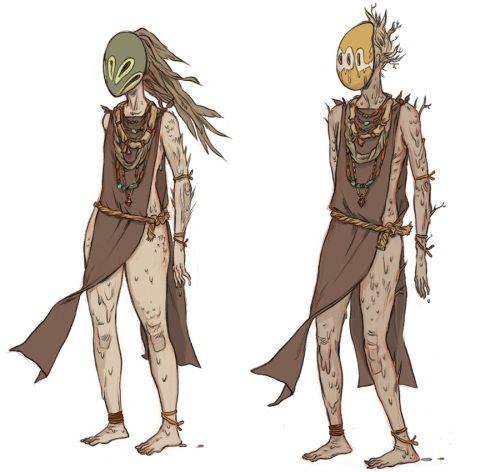 Armour can make or break an RPG, for me. If I equip a new piece of armour in a game, only to discover that it has magically sprouted cleavage because my character is a woman, it makes me want to throw my computer across the room. And don’t get me wrong, cleavage is all well and good in all sorts of circumstances. It’s just the inconsistency that drives me rabid. And the fact that I don’t have a choice in the matter.

Armour in The Crossing would look exactly the same on both sexes. If you crafted a suit of armour or clothing that was rather feminine, it would look the same on a male character as it would on a female, and so on.

And if you found or bought a suit of armour that you didn’t like, then you could (with the corresponding skill set) tweak its shape yourself, to suit your own preferences.

I have quite a lot left to talk about tomorrow, including the combat system, how multiplayer is implemented, details of exploration, and so on. I’ve left all the most abstract, challenging stuff for one post, so I’ll try not to make a twenty-page essay out of it.

11 responses to “The Crossing”