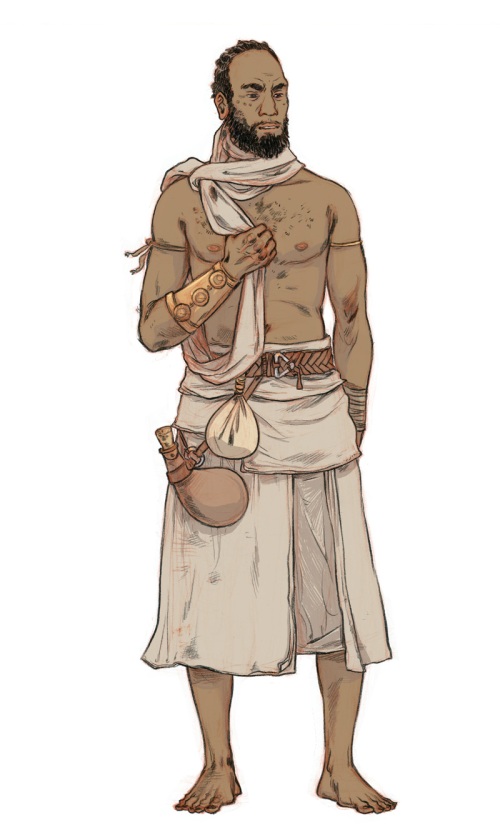 There are three playable races in The Crossing: humans, gate people, and simulacra. Choosing which race you wish to play as is the first thing you do upon entering the game. So let’s begin.

Humans in this world, as I’ve already begun to explain, are men from the ancient civilizations of earth who have proven themselves to be exceptional warriors, and who after their deaths are invited or compelled by some mysterious magic to enter The Crossing.

Playing as a human, you enjoy enormous privilege. Everything in The Crossing – everything in the culture and economy of the world – seems to exist for your benefit, and you have an immediate advantage in being respected and feared by nearly everyone you meet. You begin the game with the best resources, in terms of starting gear. On the other hand, because of your high status, some people will be adverse to offering you aid or training.

Having lived your life as a renowned fighter, your physical strength is considerable, and your competency with weapons, as well as your capacity to learn new martial skills, is higher than any other race. However, since as a human you are also a completely material being, you cannot use any magic. Only by using enchanted items can you approximate the magical abilities that other races may naturally wield.

The Crossing is populated primarily by the gate people. According to their own mythology, the gate people were created by an ancient race of giants in order to serve the human warriors as they sought to make their crossing into godhood. As such, their culture is one of well-ingrained subservience, and few individuals seek to subvert or oppose this system. Young women are often raised as concubines, to provide humans with female companionship. Men are usually workers or tradesmen.

A very few gate people, however, have begun to investigate their own potential. They have discovered that, far from being a weaker species, each member of the race possesses, latent in his or her physical body, a ghost – a powerful magical force which can be manipulated with practice. Playing as one of the gate people, you will begin to awaken and unravel these powers, and perhaps in doing so discover the real origins and history of your people.

Starting the game, you lack immediate material resources (armour, weaponry, etc.), but you have other advantages. You have access to many trade and training opportunities. Your physical strength is only moderate, in comparison to a human. You are not as resilient against violent force, but you can endure the weather and terrain of your world much better. And your magics, if you cultivate them, offer ample compensation. 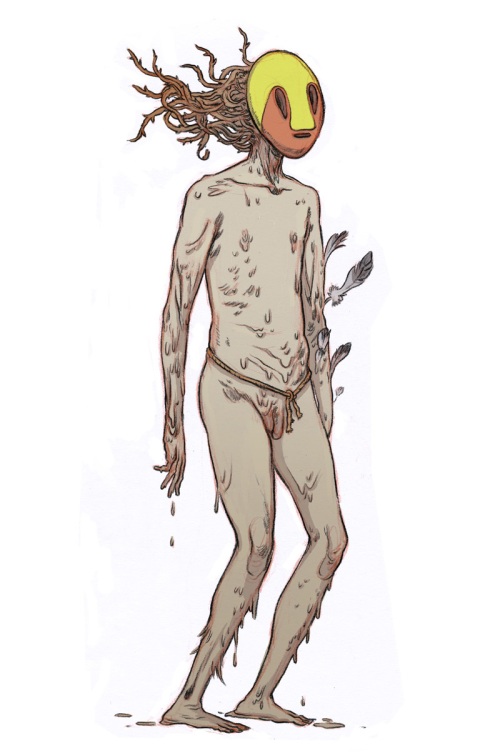 There are very few Simulacra in The Crossing. They are peculiar beings, constructs of mud and bone and various animal components. All simulacra are created and made animate by an old woman called the Bone Witch, and afterwards set loose into the world to develop or decompose as they will.

As a simulacrum, you are an unknown entity, even to yourself. An incomplete being. Though you do not have a ghost, as the gatepeople do, some remnant of the ghosts belonging to the animal parts in your body can be coaxed forth and strengthened. You are wily, in your lurking strangeness. You are very good at creeping around and gaining entrance to otherwise inaccessible places.

Simulacra start with the fewest advantages. You are extremely weak, and susceptible to harm. Your fragile body does not fare well when exposed to the elements, and water is particularly dangerous as it will break down the mud and dust that holds your make-shift skeleton together. On the other hand, from the get-go you can explore at a much broader range than other races, without having to fight or flee. You are naturally stealthy, for one thing. And because you do not register as alive to many wild creatures, you are frequently overlooked by would-be attackers. This makes you an excellent treasure hunter, though you have a longer way to go in order to become a competent warrior or magic-wielder.

So. Creating a character to play with, you would choose one of these three races, and go on to customise your appearance. Though I outlined the respective strengths and weaknesses of each race, I find that games work best when the player’s performance isn’t restricted in the long run by their early choices. If you chose a human and wanted to use magic, for instance – or if you wanted to be a Simulacrum warrior – I wouldn’t want that to be impossible. It might take longer to get there, but I wouldn’t want that to be a decision that limited your efficacy in the long-term.

Each race should feel distinct, however. Their respective abilities should define their play-style, without limiting it. Attacking something with a sword should feel very different between all three.

I’ll get into a little more detail about my imaginary game mechanics later. Since I don’t actually have to program anything, I get to be as ambitious as I like, right? But I’m building this hypothetical thing not because I think I could actually even begin to design a working game out of thin air, with no previous experience. But because I want to think about what my ideal game might feel like, to play.

Have many of you played the Mass Effect series? This is a good example. In the Mass Effect games, you play as an (absurdly) competent spaceship commander, who is generally regarded by everyone as being the most effective and badass person in the universe, bar-none. It’s a total male power fantasy. You shoot lots of stuff. Somebody tells you how awesome you are at least once every five minutes. You can punch a news reporter, if you want. It’s a great game.

In Mass Effect, though, you can change your character’s appearance, so you don’t actually have to look like this guy. You can make your character a woman. Of course, sticking a woman in a male power fantasy and giving her a gun so we all know she’s “kickass” isn’t anything new. That shit gets done in the name of progress all the time, and it pisses me off. Mass Effect is a little different, though.

Playing a woman in Mass Effect, you are doing everything that a male character does. All the animations are the same. You sit like a man and stand like a man and walk like a man. Not to say that that’s necessarily what we want, either – videogames where women walk like men. But it means that she isn’t animated like a woman in a videogame – full of weird, institutionalised sexism. And that is something I’m interested in.

And that is why changing your character’s appearance can be more meaningful than you might imagine. Subversive, even. And more on this tomorrow, because I’ve ranted long enough for now.

25 responses to “The Crossing”