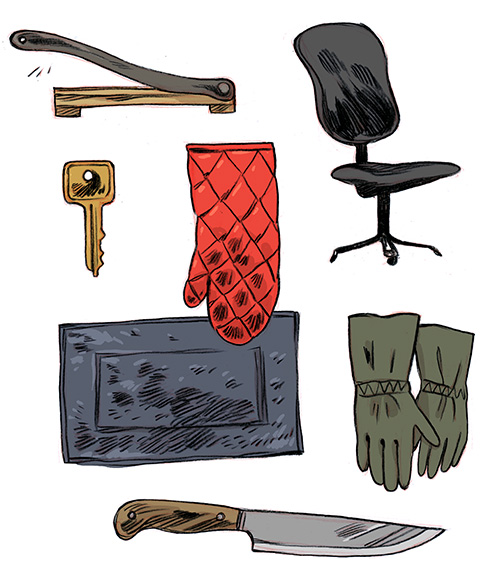 You know I love to want things, but every want drags behind it a shadow: an actual, practical (and probably long abandoned) need. It’s like a mirror world, yes? Or an alternate but overlapping plane of existence! So here is a need list.

1. Let’s ease in with a semi-want/semi-need. It’s halfway through the portal, if you like. This is supposed to be a paper cutter (it’s an awkward thing to draw), because I’m dead tired of having to cut all my paper manually, with scissors. I cut a lot of paper, and I’m impatient, so I make a ragged mess of all the edges and then they don’t line up well in my scanner… it’s very inefficient!  My cutter would have to be at least 24″ x 24″, and you know I’d prefer a cool old wooden one, because of course I would.

2. This is a key to my building’s garage. I don’t have this key, because the effort of knocking on my building manager’s door, and telling him I need one, and passing him $3 is, apparently, too much for me to handle. I don’t even think it’s social anxiety in this case – or not completely – just sheer, pathetic inertia. In the meantime, my lovely elderly car (handed down to me from my aunt, may she bask in good fortune forever) sits outside in the rain and smells increasingly like wet golden retriever.

3. This is an oven mitt. The thought of owning an oven mitt actually annoys me – I don’t know why, maybe because I’d have to find drawer space for it – but then, once every six months or so, I burn my hand on a cooking tray and can’t draw comfortably for a week, and I’m forced to reevaluate. Still not worth its cost in muffins, though.

4. This one is serious, because I’m certainly ruining my (already somewhat compromised) spine by sitting all day in a rickety old wooden chair instead of a normal, reasonable computer chair. So why haven’t I taken care of it? I don’t know, I guess because proper chairs are expensive and sort of ugly, and somehow there are always other things I’d rather get. Maybe I could try a back supporting pillow as a  halfway measure, but I keep putting that off too.

5. And here we have a bath mat. I only remembered this at the very last minute, because I’ve gone so long without one that I actually tend to forget that people use them (at least until I’m bathing at somebody else’s house, as I’m doing right now). Anyway, I’m not sure if I need this, but I feel like I’m supposed to need it.

6. Work gloves! This is a new need. I was just given a community garden plot (right in the park beside my building – it’s great) but I have no correct equipment or clothing. I keep meaning to buy gloves, and then forgetting, and then getting dirt so far under my nails that I have to cut them below the quick to remove it.

7. And a knife. For at least the last four years, I’ve been cutting all my vegetables and stuff with a fold-up pocket knife. Which, frankly, works just fine, only it rather threatens the illusion that I’m a functional adult.